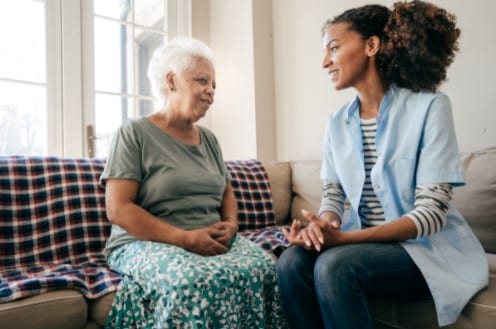 President Biden has introduced a plan to spend $400 billion over eight years on home health care and community-based care for the elderly and people with disabilities. The money would go to expand access to care and support higher-paying caregiving jobs.

As the elderly population grows, our long-term care system is becoming increasingly strained. The AARP found that in 2020, more than one out of every five Americans — 21.3 percent — were acting as caregivers, either caring for a relative or a close friend.

Many women have had to drop out of the workforce to care for aging family members. In the meantime, paid caregivers are typically underpaid and overworked, with one in six paid caregivers living in poverty. And our elderly population is only expected to grow: By 2030, one in five Americans is projected to be over 65.

Related Post: When To Leave A Nursing Home And Move Back Home

Recognizing that the United States is “in the midst of a caregiving crisis,” President Biden has proposed boosting funding for home and community-based long-term care as part of his $2 trillion American Jobs Plan.

While the plan does not have specifics, it proposes to expand access to long-term care services under Medicaid that help people stay at home and avoid care in an institution. Currently, only nursing home care is mandated under Medicaid, with states providing care at home or in the community at their discretion.

Waiting lists for home and community-based services under state Medicaid programs can stretch on for years, and only a small fraction of those who need care receive these services, according to Kaiser Health News.

Among other things, President Biden wants to extend the Money Follows the Person program, which is a federal initiative designed to move people out of nursing homes and into home-based care. The program provides grants to states to create innovative home and community-based programs.

Related Post: What Is An “I Love You” Will And When It’s A Bad Idea

President Biden is also proposing that money be put toward creating well-paying caregiving jobs and that home health care workers be able to join a union and engage in collective bargaining.

The White House states that this “will improve wages and quality of life for essential home health workers and yield significant economic benefits for low-income communities and communities of color.”

President Biden’s plan does not provide details, leaving It up to Congress to fill in the particulars when drafting its legislation. It is unclear how much of Biden’s proposed funding will make it into a final bill.

Explore your possibilities as an elder with an elder law attorney. Still not sure if you need one? Read 10 Reasons You Need an Elder Law Attorney