Statutory Power of Attorney Issues With Self Dealing

Today’s video talks about the language of a statutory power of attorney document and the limitations it has when it comes “self dealing”. Essentially, your Power of attorney may not have the ability to transfer assets to themselves. This becomes a problem when you have a couple who are each other’s POAs.

I hope this does not come as a surprise to anyone, but not all power of attorney documents were created equal. Every general document usually has to be tweaked and tailored to your particular situation. That’s why the involvement of an estate planning attorney is so crucial to make sure that all of your ducks are in a row.

Attorney Joan Wilson explains what situation you may have to tackle where your statutory power of attorney doesn’t have the correct self dealing language. Watch the video or read the script below.

I wanted to do a quick video today about powers of attorney. Because the crisis we’re currently in with covid19 and lockdowns in nursing homes and social distancing has brought to light an issue we’ve seen with powers of attorney for a few years now.

I thought it was a good time to explain that to everybody, and have everyone who’s interested, look at their power of attorney and see if it shouldn’t be changed or amended. 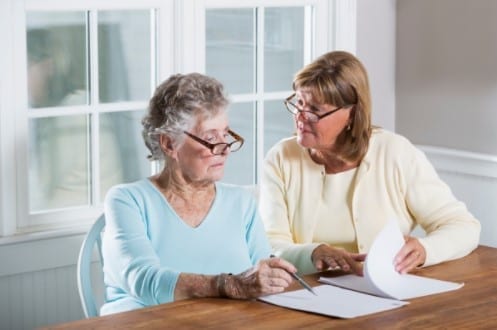 The issue is that the statutory power of attorney in Connecticut does not grant to the agent, the person that you’re giving the power to, the right to make any transfers to him or herself.

And when this becomes an issue, is when we’re working on a Medicaid application and we need to transfer assets from one spouse to another. Because generally when there’s a married couple, they do name each other as the primary agent.

Can You Transfer Ownership of The House To Your Spouse?

They also often own all of their assets jointly, or most of their assets, including their real estate. And when one of them is in a nursing home and looking to apply for Medicaid or title 19 to pay for that long-term care, it’s a good idea to transfer that person’s ownership in the house to the spouse who’s living at home.

It’s perfectly legal, it’s acceptable, it’s not part of any sort of penalty and it helps to protect what is often the most valuable asset in the couple’s estate.

But if the person in the nursing home cannot sign the quitclaim deed, then we need somebody else who has the legal authority to be able to sign it for them.

If the couple has executed very simple statutory powers of attorney under the Connecticut law, they might think that they have that authority, but they don’t. Because the statutory form does not give the agent the right to self-deal.

This means that the agent can’t transfer assets to him or herself, and that causes big problems. Now it may not be something that you want.

I would suggest that everybody looks at their power of attorney to see if they have that self-dealing language. And if they don’t and they think it would be a good idea to have it, to reach out to your estate planner or elder law attorney and talk about adding that into your power of attorney.

So if you’re in a situation when you or your spouse is in a nursing home, unable to sign, and you really would like that asset to be protected for your family, that your spouse would be able to take care of that, and transfer the asset to him or herself.

I hope that helps and if you have any questions about it we are here we’re available via phone via email and I hope you all stay healthy and well. See on the other side.

Capital Gains Taxes On Real Estate Sales – When You Can Avoid Them and When You Cannot
April 1, 2022